I thought I’d do some prep work for a project that I’d like to finish before the Christmas break:  a time-lapse rail kit for the Nikon D750 DSLR camera. I’ll be going to Arches National Park in Utah for that week and wanted to do some astrophotography and sunset time-lapse videos. Here’s vaguely what the rig will look like: 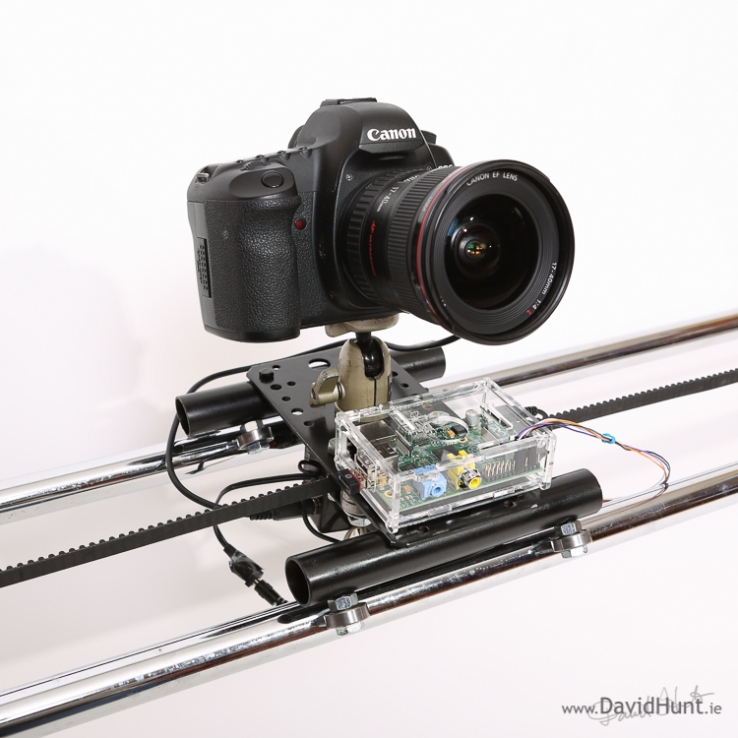 This photographer/inventor David Hunt has done a pretty good job on his rig and has produced some stunning videos. I hope to take things up a notch since I have access to a 3D printer and a variety of extruded 80/20 aluminum rails from ActoBotics, for example.

Oh… and the entire rig will need to be portable since I’ll likely be backpacking it into the park. Fortunately, I have a sewing machine and a good supply of marine-grade canvas to create something to hold and carry all of this.

Fortunately, Fry’s Electronics sells some of what Adafruit has to offer and in this case, it’s a tiny TFT screen with a touchscreen built in. It’s technically called a “Pi Hat” since it connects right to the top of a Raspberry Pi 3, for example.

I’ve got it connected to a Raspberry Pi 3 and have inserted a new 4GB microSD card for this project and furthermore, have loaded Raspbian Jessie Lite for that image. Although my version won’t have a nifty graphical desktop like the photo above, it will still run touch-based graphical menus.

Looks like I’ll be using the Python programming language for this project. I’d prefer JavaScript but I only have a few weeks to get this “production-ready”, so to speak.

The next step in developing graphical menus which respond to touch is to install the Kivy  framework for Python. The menu should allow you to set some configuration options for the spacing of the photos, the number of photos for the series and things pertinent to stepping the camera along the rail using a motor. Finally, there would be start and stop features for each session as well as on-going status.

The Nikon D750 has a remote-shutter system and I’ve managed to find a good third-party version of the cable which should come in handy for this. I’ve spec’d out that interface so I should be able to remotely fire off the camera from the Raspberry computer.

This should be a fun project. I hope I can finish it in the perhaps five weeks left before Christmas break.

Still designing/printing parts here in plastic from Autodesk Fusion 360, Cura and the Robo C2 printer. It’s amazing how long it can take sometimes to print.  This particular part printed in just over eighteen hours but an earlier (high-quality) version suggested that it would have taken slightly over four days.

I’ve been having problems with a particular spool of filament from Shaxon. Given that it’s infused with carbon fiber, it has a tendency to want to stick to itself on the spool. So I’ve lost about three print jobs so far from a variety of nonsense related to the filament snagging itself as seen here.

This then results in the loss of filament to the extruder and the print job continues, going through the motions of printing but without plastic. To fix this, I’ve repurposed the base of my rock polisher to hold the spool and locking it in place with a coat hanger for the moment. When the filament tries to snag itself, the entire rig seems to work out with respect to deploying without accidents.

I’ve upgraded the Robo C2 printer with a nifty Raspberry Pi NoIR camera so that it can take photos, stream video and do time-lapse photography of print jobs. It seems to work great so far and I look forward to putting it through its paces.

And to make this easier for others, I’ve created a documentation repository with step-by-step instructions for anyone else who wants to modify their original printer to do this, too.

Okay, so technically the printer had a glitch 1/3 of the way into printing this (huge) coin example, so I aborted as it started to go funky at some point… which you can’t tell here, tbh.

Using the (included) industrial-grade Autodesk Fusion 360 software, I was able to design a part for my Robo C2 printer. It’s a cover and mount for the Raspberry Pi NoIR v2 camera (8MP resolution @ $27). I picked up several cheap suction cups (@ $0.99) from Ace Hardware yesterday and used a digital caliper to carefully measure the distances all around. I’ll sand it a little to make it smooth; the photos below is what it looks like after removing the raft and supports (throw-away extras to make everything print correctly). The jaggies inside the suction cup slot I’ll leave since they’ll grip tightly. I’ll likely also keep some of the jaggies in the fitting between lid and base for the same reason.

I’ll still need to receive the longer cable from Adafruit for this to work so I haven’t snapped down the parts firmly yet. In the meantime, I might create a ribbon clip with a second suction cup (editing the money clip from an earlier post).

If you’d like the STL files for the part now, let me know and I can shoot you the URL for those but I’ll eventually write up a step-by-step tutorial on the full upgrade to adding the video feed capability. 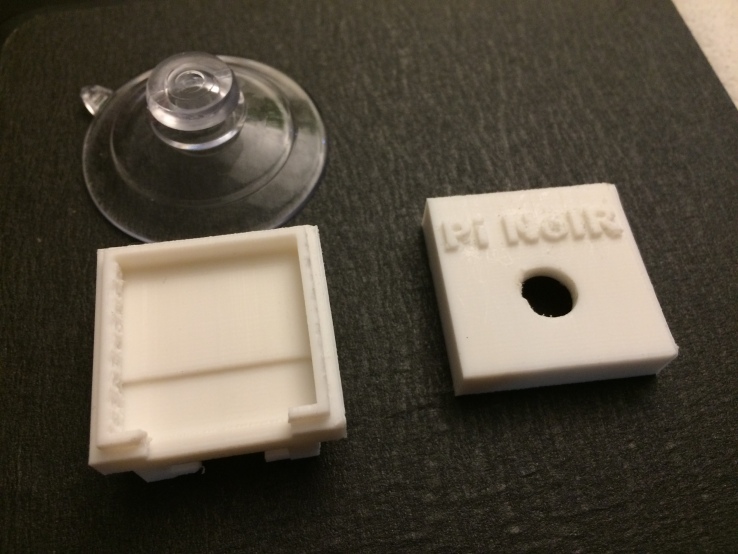 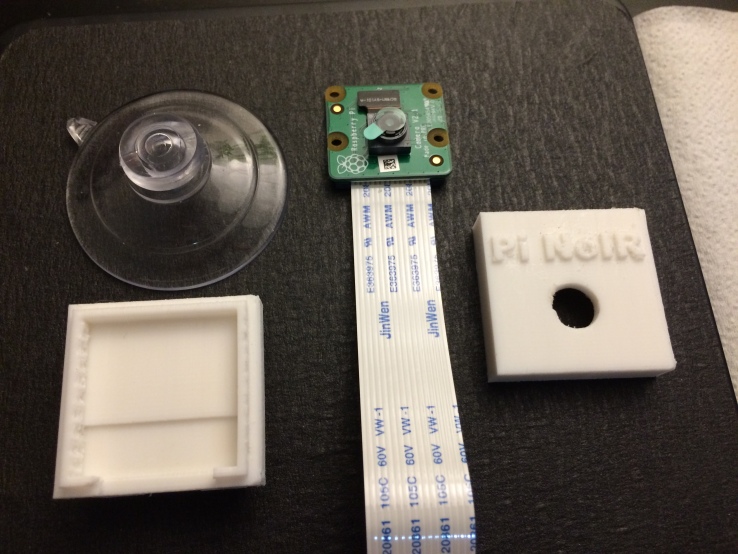 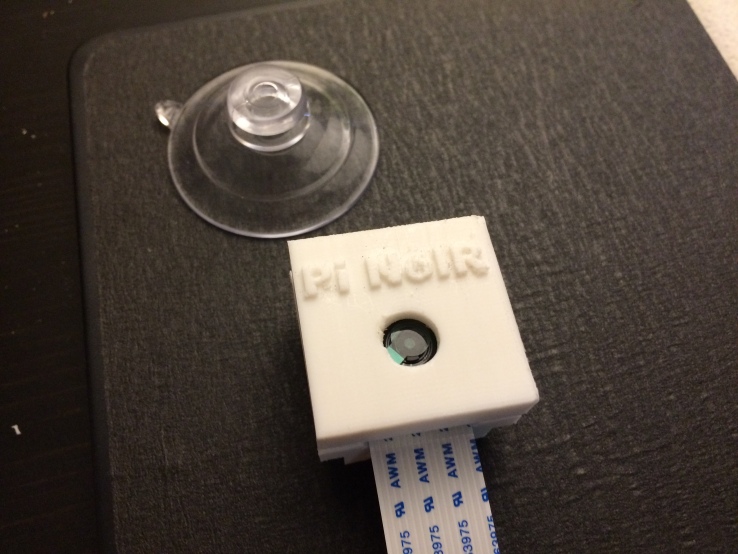 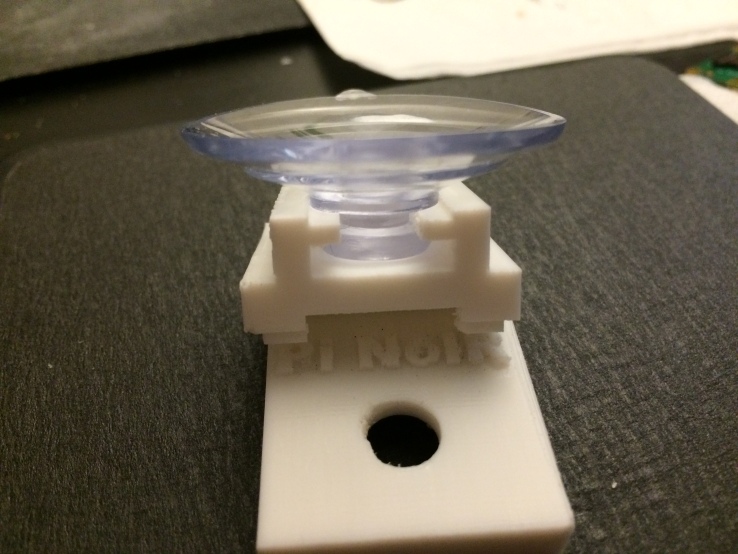 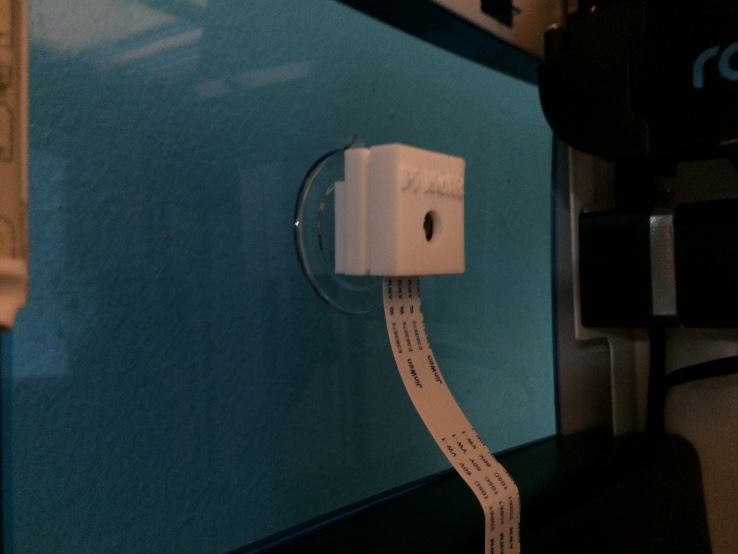 I suppose the problem with buying a 3D plastic printer is that it makes the owner imagine all sorts of modifications to that very same printer, especially so when it’s largely open-sourced in the first place.

I must admit that owning this Robo C2 printer has been a blast. I’m now past the let’s print some demos phase to the let’s print our own designs next step. And part of that design process is envisioning a better printer from this one. And what better way to modify it than printing some 3D parts, right?

So, here’s a list of some of the current things I’m doing with it.

It’s a wonderful printer and often, just because of the sounds you get from its collection of servo/stepper motors, it vaguely sounds a bit like R2D2, the cute robot of Star Wars fame. I’m working up a modification to add sound events from a variety of Star Wars WAV files related to R2D2.

As themes go, the movie Iron Man includes an AI character named J.A.R.V.I.S. (as voiced by Paul Bethany) who had some fun dialog with the Tony Stark character (as played by Robert Downing, Jr.) I’ve often thought that it would be sweet to add a sound event theme set based around Paul Bethany’s voicing of J.A.R.V.I.S. as well.

I’ve just picked up a Pi NiOR camera which I’ll be adding to the printer. Next, I’ll need a longer ribbon cable, some suction cups and a designed/printed part to hold the camera itself inside the chassis.

Given the resolution of the camera, I’ll likely need to upgrade the microSD card inside to accommodate the files from the streaming activities.

The out-of-box spool feeder seems a bit minimalistic to me. I’d like to upgrade that with a feeder which allows the spool to spin more freely. I imagine that the part needs to be more rounded at the top.

The Robo C2 doesn’t include a heated bed in its design like some of its more-expensive Robo alternatives. So I’d like to machine an aluminum bed with a heating element and add this to the system.

The maximum build size for the Robo C2 is a mere 5″x5″ square at the base so that’s a bit restrictive. There are techniques for joining a series of smaller parts (say, to make a sword) but I’m guessing that a possible approach is to remove the two blue side windows and rig up a conveyor system which is accurately positioned left/right as required. In this way, a very long part could be printed.

I’ve purchased a Raspberry Pi Sense Hat which includes a small joystick control. I think I’d like to write something so that, using remote GPIO, I could then control the stepper motors of the printer indirectly via wi-fi.

The underlying web server which runs on the printer is called OctoPrint and since it’s open-source, there are a variety of plugins for this already. I think I’d be interested in writing some plugins, especially so that someone may pause jobs in the middle so that internal components may then be assembled inside.

I’ll likely add some SMS notifications so that I can remotely know how a print job is going.

I also like the idea of adding voice control to the printer. How awesome would it be to just tell the printer to do something?

So basically, since the Amazon Alexa code is completely available and can be setup on a Raspberry Pi 3 computer, I can imagine then interacting with this piece (as installed on a Raspberry Pi) and having it direct activities on the printer itself.