Since I’m now an instructor, I thought I would create a repository which demonstrates  code for the many languages out there which could produce a command line tool/interface (CLI).

Currently, there are nine languages represented but I may add more later. Note that everything here is decidedly OSX-specific. Each subsection includes the instructions for running and/or compiling each, noting that some are compiled languages and some are not.

…that is the question.  Rather than a Shakespeare reference, I’m here referring to a term in software development which determines how a language deals with variables, for example.

When you create a variable in a computer language, it’s usually something like this:

In a case like this, we might infer that someVarName stores a number (an integer).  We might say that the someVarName‘s type is integer.  Using a pet-ownership metaphor, it’s like purchasing a dog house first (“someVarName”) and then next buying a dog to put into it (“1”).  You wouldn’t buy a fish bowl to store a dog… although this seems to work out great if you own a cat.  JavaScript, e.g., is like this picture:  it doesn’t seemingly care if you want to store a cat in a fish bowl.

There are two camps out there:  those who like languages which force the variable type and those who don’t.

A statically-typed language usually involves a step in which your code is converted into something else (compiling) and any type-related issues must be fixed before a program can be created.

A dynamically-typed language is run “as is” and the code is evaluated at the moment of truth—determinations about the type of a variable are made at this time.  If there is a type-related issue, your end-user could be the first person to see the error.

Over the past three decades, the popularity of either approach has waxed and waned.  It’s safe to suggest for the moment that the less-strict languages are gaining rapidly in popularity over their stricter counterparts. 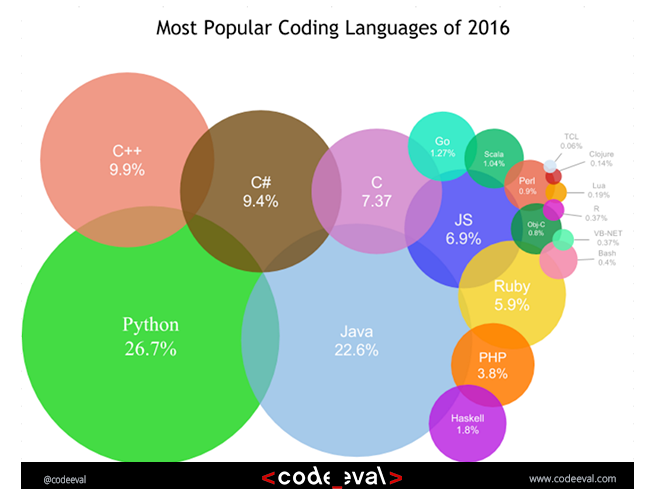 We have the world of open source to thank for the popularity and speed of development we’re currently seeing in these dynamically-typed languages like JavaScript and Python.

Honestly, though, there are too many people in that strict-is-better camp and their influence is felt within software development companies.  If I were to guess at the future of JavaScript, I’d probably have to say that TypeScript and Flow will gain in popularity as larger development teams look to lower the number of bugs in their code.

I don’t know, though.  Maybe it’s time that we just relax and let the cat hang out in the fish bowl.

Many times in my career I’ve been at some technical crossroads which demanded a decision on my part:

If you think about it, that’s a pretty big gamble.  What will hiring managers be looking for two or even five years in the future?  What will look better on your résumé, a couple more years of experience in the old skillset or the old skills plus the two years of the new skills?  Is it possible that continuing to work with the old skill will now somehow look bad for your career?  But then, if you include too many skills does it look like you’re not focused enough on anything to actually have expertise?

I’d suggest that the following trends are appearing in the development playing space.

To me, the future of coding will embrace anything that will allow one set of (familiar) code to be compiled to multiple platforms.

If you want a job as a coder in the future it’s time to start actively steering in the right direction instead of just passively continuing to use the platforms you’re now on.  If you don’t have the skills I’ve listed above then consider taking on a project to learn one or more.

If you’re currently embedded on a team that uses Java, for example, then I’d suggest that it’s going to be increasingly harder to find work elsewhere. Given that it’s becoming harder to find coding work now with all the competition it’s more critical to possess the skills that managers are looking for on a team.