Okay, so it’s been a year since Microsoft purchased github for a cool US$7.5B. In today’s terms that’s merely Amazon’s annual gross in sales. Remember when a million dollars seemed like a lot of money?

For some of you who aren’t coders, you probably don’t understand the impact of this move especially within the context that Microsoft has a history of being sued for very questionable competitive practices. Github was likely the largest collection of freely-available source code in the public domain (also known as “open source”) and probably still so even after the acquisition. Do we even have to ponder the “why?” question at all? 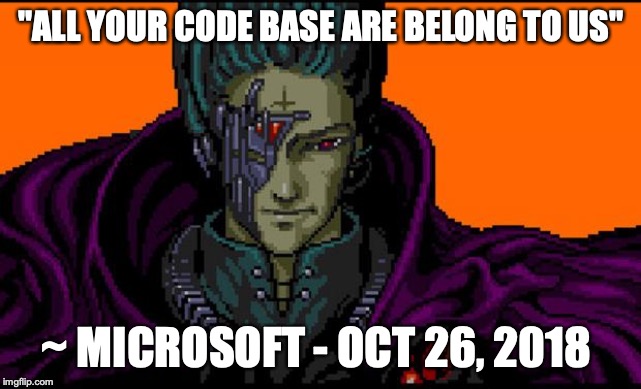 Github had not just most of the open source code but it also contained countless private repositories from countless other entities. Imagine that almost overnight Microsoft then gained access to all the privately-held coding secrets of their competitors.

What does Microsoft really think of open source?

“The paradigm of freely sharing computer source code—a practice known as open source—traces back to the earliest commercial computers, whose user groups shared code to reduce duplicate work and costs. Following an antitrust suit that forced the unbundling of IBM’s hardware and software, a proprietary software industry grew throughout the 1970s, in which companies sought to protect their software products. The technology company Microsoft was founded in this period and has long been an embodiment of the proprietary paradigm and its tension with open source practices, well before the terms “free software” or “open source” were coined. Within a year of founding Microsoft, Bill Gates wrote an open letter that positioned the hobbyist act of copying software as a form of theft.” ~ Microsoft and open source – wikipedia

Microsoft is now embracing something they’re calling Inner Source for their own internal coding. Clearly, Microsoft loves the infrastructure of tools and the free availability of open source… only they truly do not understand the idea of then sharing back with others.

Microsoft’s own Inner Source is like walking around the table in a poker game, freely viewing the cards in your opponent’s hands, purposely hiding your own cards and then expecting to be able to continue playing in the game.

Sorry, but I have to call bullshit on all this. Microsoft isn’t to be trusted. They’re not our friends. They’re stealing secrets from their competitors and they’re using those secrets to create closed-source software (business as usual). They’re destroying the very ethos of open source with every passing day.