If you remember from my last post on the subject, I’m into those old-school glass bottles of various sizes. Here’s the typical size and lid type that I’ll be talking about: 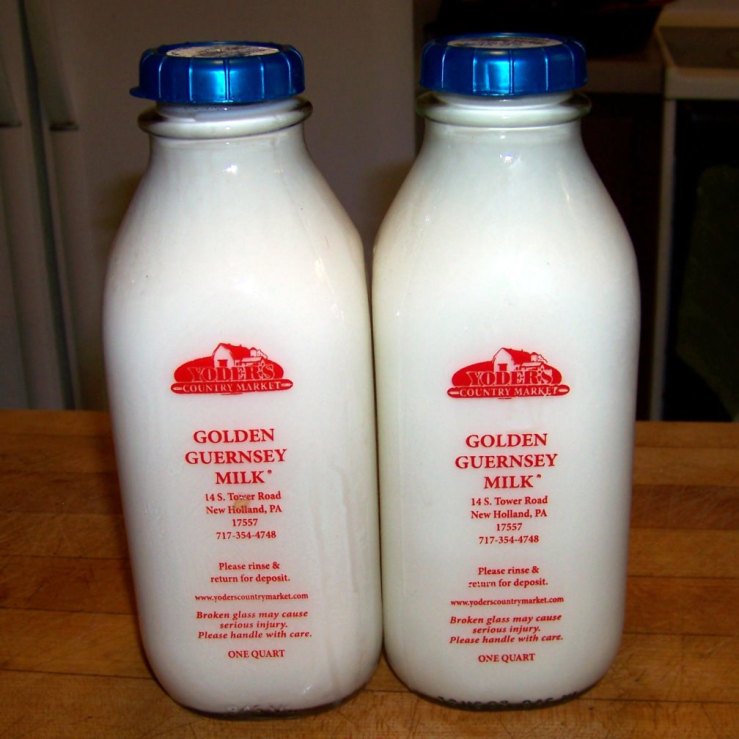 The lids seem to come in a variety of colors and are probably made from ABS plastic—they work well and last a while. Everything cleans up nicely and I’ve had quite a few of these in my pantry for the last five years now.

There are times, though, when I wished that it were easier to tell what’s what. I honestly have a variety of things which kind of look the same: masa, ground corn meal, pancake batter, semolina flour, etc. They’re all vaguely yellowish. The same is true for the many flours which I buy.

My usual routine is to put a small Post-It type of note of some kind on the front of the bottle. But sometimes these fall off. I have been known to tape them on.

It would be nice if I had a way of easily identifying the contents of the bottle as well as preserving things like nutritional information or the instructions that you might find on the back of a Cream of Wheat box. I could also record the date of purchase and/or the expiration date but I’m not that fussy.

Today’s creativity involves the idea of self-identifying bottles. I’ve just purchased some tiny RFID tags which I hope to embed inside my own self-made bottle caps. I’ve just spent an hour designing the cap in Autodesk Fusion 360 and it’s now getting a test print to see if it fits. When the tags arrive I’ll carefully measure one and then design an internal cavity to accommodate the tag inside the cap. Given that the tag is completely embedded, it should be waterproof as well and should stand up to being repeatedly washed.

The usual tactic with respect to printing these with an embedded object is to create two jobs out of the part (1st half, 2nd half) and then insert the tag in between the print jobs. My own GetToDahChoppa project would be the way of chopping that. For this project it will be easier to just insert a pause command at the magic moment in the gcode file so that the printer pauses, alerting me to insert the tag and then I’ll manually resume. As long as I don’t include internal supports, this technique should work fine.

I thought I’d create a NodeJS-based server which sits on a Raspberry Pi computer which minimally includes an RFID reader. It would host a database of the RFID numbers and their corresponding information for each bottle in service.

The system should include a mechanism for simply reporting which bottle is being held up to the reader as well as several convenience features to include fetching the nutritional information given a UPC symbol. I’m guessing it would be nice to have something which actually scans UPC symbols but that’s not strictly necessary since it doesn’t take much to just type them in.

I guess I’ll have to type in the instructions or include a photograph of the box’s instructions.

I guess now, I’ll need to determine what kind of interface this will have. I could include a TFT panel. I think this would be the normal way of communicating things back to the user. In this way, you could click tabs on the screen if you wanted more information. I would assume that this would use Kivy as the graphical interface. It’s possible but I’d have to have somewhere near the pantry with power and the correct orientation, distance and lighting for the panel. And it must also work out with respect to the distance of the reader.

At the moment, though, I’m thinking that it might be interesting to push the report information to an Echo Dot that’s in the same room. In theory, you would hold the bottle’s top to the horizontally-mounted reader. There would be a delay of perhaps three seconds and then you’d hear Alexa say “Cream of Wheat”, having initiated an Alexa Skill of some kind. I’m guessing then that I might have to say “Alexa, read the instructions” to have her then read from another topic.

Given the way Amazon’s Lambda functions work, it feels like it will be problematic unless I host the database in the cloud otherwise the function wouldn’t easily have access to that information. I dunno, but I kind of like the idea that the database just lives on the Raspberry Pi itself.

I could use a simpler text-to-speech project from earlier, requiring a speaker on the Raspberry. The sound quality is basically similar to listening to Stephen Hawkins reading your panty list. I’ve also been successful using the Snips home assistant interface for doing something Alexa-like without the cloud. The quality of the output voice isn’t as slick as Alexa but it’s good enough.

Hot off the printer

While I’ve been thinking about all this, the first draft print has finished. It’s very nearly identical to the hand-measured original lid only that inner insert seems to be slightly too wide for the bottle. The PLA plastic I’m using is more rigid or I’ve made that wall too thick; it will need a slight adjustment and another test fit before I advance to the next step. It lacks subtle details that aren’t actually necessary on the original lid like central spokes and outer ribs.

I’ll tweak the design and reprint it. And I guess I have to wait for those RFID tags to arrive in the mail before the next phase of this.