I spent much of the morning at the Taos Pueblo but not really any photos to show because they don’t really approve of that. They’re nice people, though, and I had some amazing fry bread and green chili.

Next stop was Chaco Canyon and the thousand-year-old ruins found there. At one time over a thousand people lived in this thriving community.

Santa Fe turned out to be a fun city (at least the original/old part of town) with lots of shops, art galleries and cafes/restaurants. Had a quiche and a cafe au lait at the French Pastry Shop & Restaurant there and later, lunch at the Blue Corn Cafe nearby.

A very cool spot to check out is an artistic interactive/mystery sort of place in a converted bowling alley called Meow Wolf. They call it an immersive art installation. The current rendering is named House of Eternal Return and features what appears to be an entire house inside. From inside this house, you gather clues about the whereabouts of the family members. There are a variety of interactive musical pieces like the dinosaur skeleton and opportunities to go inside furniture you wouldn’t otherwise suspect is a portal to another dimension.

Continuing the tour of the Southwest, I visited the Gila cliff dwellings of the Mogollon (c. 13th-15th centuries). The Mogollon people created these by building them up over time and through their hard work, of course. The park allows you to go inside, climb ladders and such.

So, I’m traveling throughout the Southwest for Christmas break—merry Christmas by the way—and I wanted to share some photos of Chiricahua National Monument park, New Mexico. A hoodoo is a column or pinnacle of weathered rock, in case you didn’t know that. And this park is quite full of them on every turn.

Quite a few of the rocks have been weathered down so that a remaining piece stands precariously on top, threatening to fall. It’s interesting to imagine just how long these have been forming.

Wikipedia lists the balancing stone in the third photo above as one of the best examples on the planet.

Next stop appears to be Silver City today which was a booming town in the 19th century and location of the famed Billy the Kid character. (Stay tuned.)

Since I’m now an instructor, I thought I would create a repository which demonstrates  code for the many languages out there which could produce a command line tool/interface (CLI).

Currently, there are nine languages represented but I may add more later. Note that everything here is decidedly OSX-specific. Each subsection includes the instructions for running and/or compiling each, noting that some are compiled languages and some are not.

I give so-called “lightning talks” at San Diego JS, a four-times-per-month local group on Meetup.com. Each talk only lasts five minutes so there’s time for several speakers within the span of a single event.

The venue is typically packed. Here’s a photograph of a typical turnout—there were about 120 attendees this month alone. 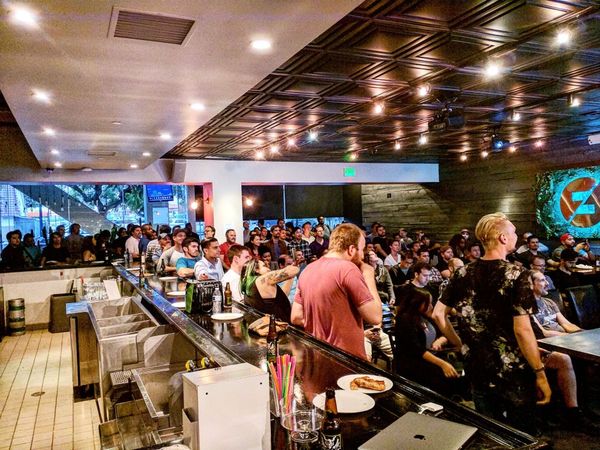 I suppose you can communicate a lot in a mere five minutes. It is a bit challenging to try to distill down all the things you need to say into this timeframe. There’s really no room for story-telling, just tell the straight facts and details as you race through your slides and screenshots and nothing more. At best, you can hope that someone will ask a relevant question which may allow you to go into some detail you’d earlier hoped to have included.

Many of my projects involve more than one computer. Unfortunately, the security settings on most wi-fi routers at venues like this don’t want you to connect from one computer to the next. The router would actively prevent your demo from working. So I’ve learned to bring along my own networking, which is a hassle. This is especially difficult with IoT projects, for what it’s worth.

Another challenge is related to power. It seems like each of the speakers needs to setup prior to the event and so they all want to bring along their power adapters and plug in. This means that the venue would need to accommodate all those brick-style adapters and they usually forget this.

And I suppose, a recurring problem is that of screen resolution compromises that you have to put up with. You will have formatted all your screens for one resolution while creating your content, only to find that you’re now presenting in a smaller resolution. This then threatens to clip off content or the font size is now too small to be seen by those near the back.

Regardless, it’s a rewarding experience and I hope to give more talks in the months to come. I would encourage others to do the same. It’s a great opportunity to give back to the community of like-minded coders.